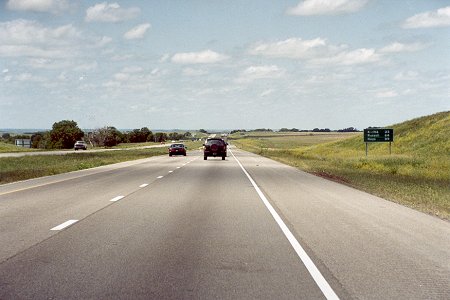 What appeared at first to just be another typical Spring day in the Great Plains with
small puffy cumulus clouds was in fact a moderate risk for strong convection and supercell thunderstorms.
The major ingredients seemed to be present for an outbreak of tornadoes.  There were high CAPE values, strong
deep shear, a dryline and an upper level disturbance approaching from the southwest.  We anticipated initiation of supercells to
take place in far southwestern Kansas late in the day and headed in that direction at 8:30 AM. 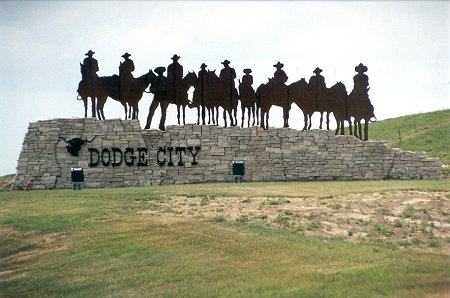 We traveled west to York, NE, south to Salina, KS,
and then southwest across Kansas, to Dodge City for a
briefing at the NWS office.  Partly cloudy skies, temperatures
in the 90's with 70 degree dew points made the day very oppressive. 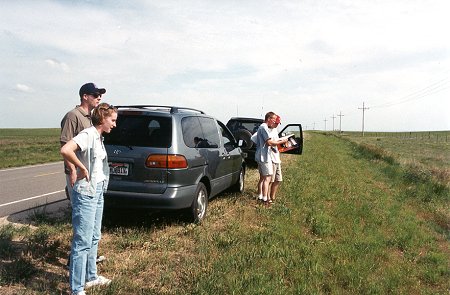 We drove south to near the Oklahoma line
and waited for the cap to break.

Finally,  a cumulus cloud began to rapidly mushroom upward
off toward Liberal, KS at the Oklahoma border.  Examining the road maps,
we knew the large distance between roads out here would be a problem. 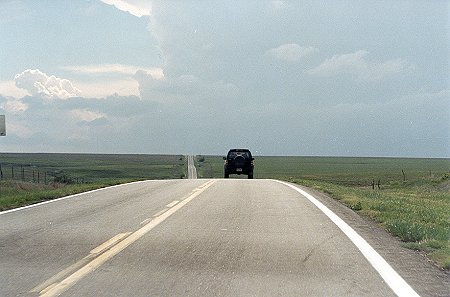 On the positive side, as we headed for the backside of the supercell,
there was literally nothing to block the view for miles and miles. 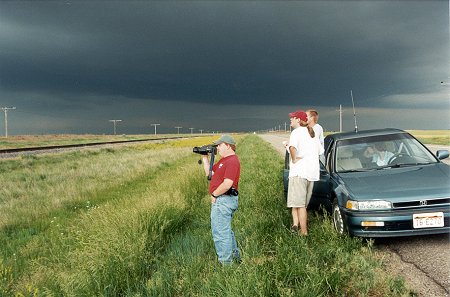 We positioned ourselves on the west side of the supercell
in Plaines, KS, as it moved east southeast at 35 mph. 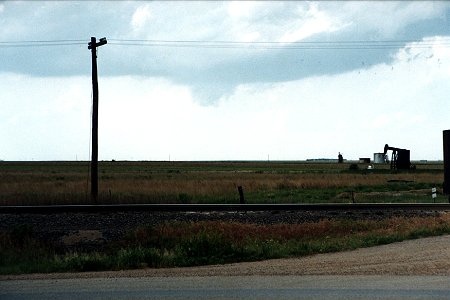 Finally, a small funnel began to form, but it quickly lifted.
Noting the strong rotation in the wall cloud,
we knew it was likely to drop another tornado, so we
began to pursue the storm once again. 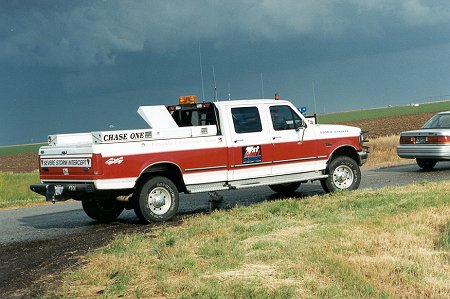 Parked nearby was a chase vehicle that would give any chaser
"vehicle envy"! 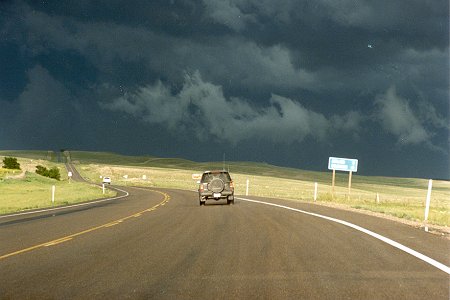 Dodge City, KS issued a warning for a possible tornado
southeast of Meade, KS based upon Doppler radar. 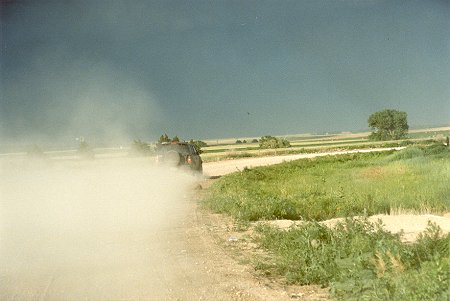 The next paved road to the south was over 30 miles away so we
decided to cut across the region on a gravel road. 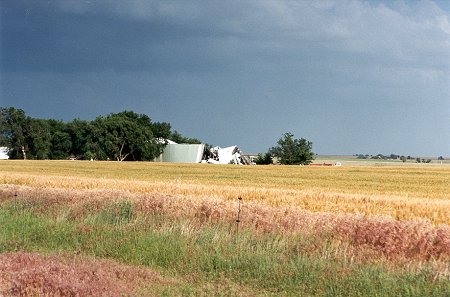 As we neared Meade State Park the NWS office in Dodge City, KS
issued a statement on weather radio that a small tornado had just
exited the state park.  We saw the fresh damage to some
storage buildings and knew we were close. 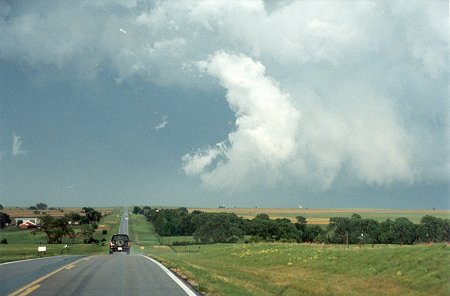 The gravel road we were on dead ended on a north-south road.
We had to make a choice of going back north or heading south.  With the speed
of the storm, the shorter distance to the northern paved road seemed
more appealing.  We headed 14 miles north and then drove toward Ashland, KS 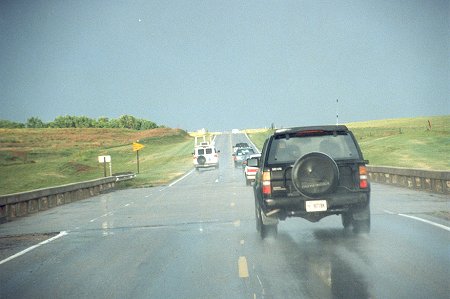 Just outside Ashland, KS we joined up with a convoy of chasers,
including several VORTEX vehicles and the VORTEX command
vehicle with project leader Erik Rasmussen (seen passing
part of the convoy, ahead on the left). 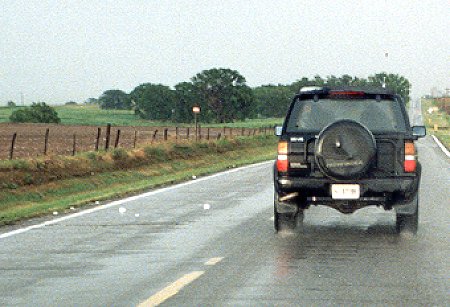 Monitoring the scanner, we learned that both VORTEX and Howie Bluestein
were reporting baseball size hail a half mile ahead of us.  As we
entered the area, large hail (note the road to the left of the
SUV below) was observed on the road.  WE STOPPED. 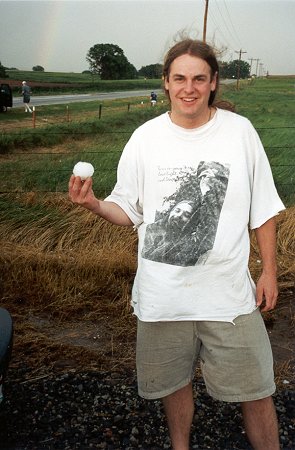 And, along with other chasers not wanting to get hail damage,
we stopped and took pictures of the large hail. 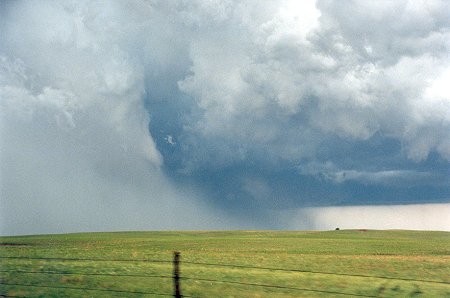 We re-joined the chase, but were repeatedly beaten back by
the heavy rain and hail.  The best we were able to see was the
outline of the tornado through the rain shield. 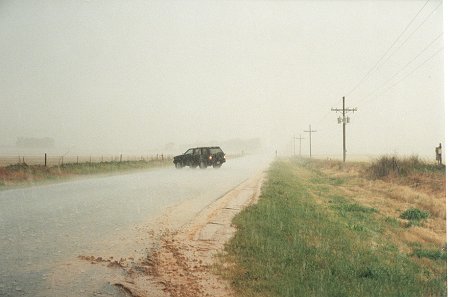 At this point the storm had entered the most open area of the state
and we were over 35 miles away by road yet only 5 miles from the tornado.
The few that were successful on this day, chose the southern
route and approached the supercell from the rain-free side of the storm. 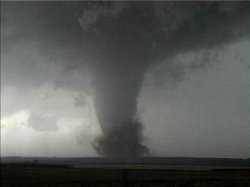 Click on the tornado photograph just below to see the photos
taken by Bob Conzemius & Shaun Kelly who managed to get to
the southern side of this supercell. 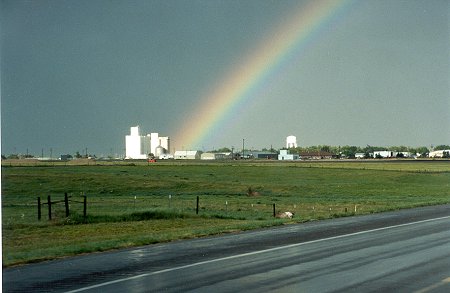 As we drove north back toward Nebraska.  We were still pleased with the chase,
despite not getting a good view of the tornado.  The students on the chase know that
it is not exclusively the observation of tornadoes, but it also includes an
understanding and observation of the entire storm process.  Just outside
of Protection, KS  we were greeted by a rainbow.